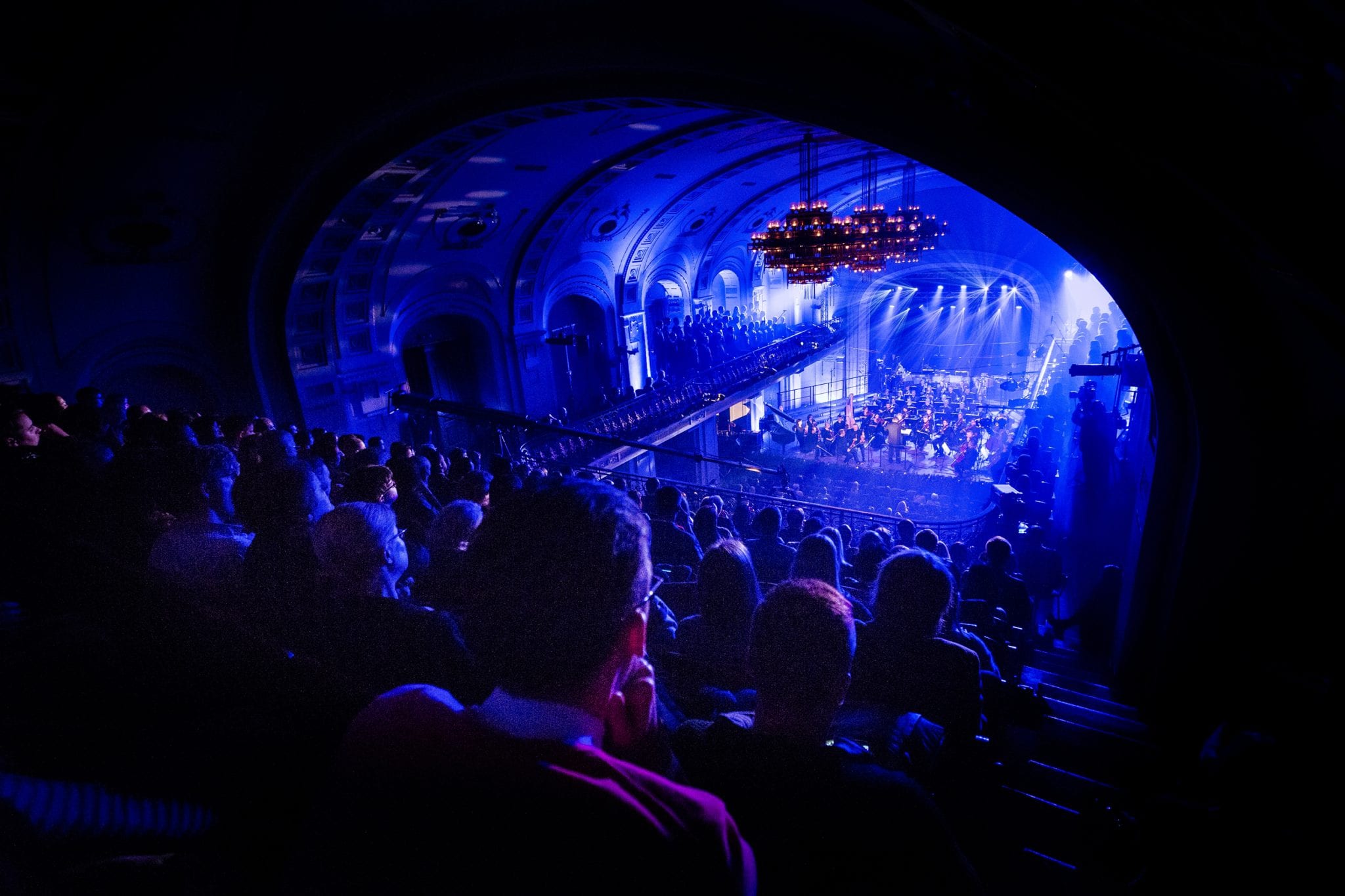 On three successive nights just before Christmas – on December 20-22, 2015 – at the Lithuanian National Philharmonic, Bel Canto Choir Vilnius presented Deep Field, the latest piece by Eric Whitacre, one of the most famous contemporary American composers. The work is written for orchestra, choir and electronics. For the first time in the history of choral and classical music, the performance of the piece integrates a special Deep Field mobile app that emits electronic sounds, and the audience becomes part of the performance.

Vilnius – the third city in the world where Deep Field was performed!

The world premiere of Deep Field – a piece by a rock star of the global choral scene Eric Whitacre – took place in May 2015 in Minnesota, USA, and the European premiere was in August at the Royal Albert Hall in London. Bel Canto Choir Vilnius was honored to present the national premiere of this work in Lithuania, becoming the first in the Baltic region to perform it. Vilnius became the third city in the world where fans of classical and choral music heard this innovative 25 minute-long soundscape of epic ambition. Deep Field was commissioned by the Minnesota Orchestra and the BBC Proms, the largest classical music festival in the world.

Eric Whitacre’s Deep Field was inspired by images captured by the NASA Hubble Space telescope that were given the same name, providing the deepest view of the universe so far known to science. The most powerful NASA telescope orbiting the Earth above the atmosphere, which was named after American astronomer Edwin Hubble, was aimed in 1995 at a tiny “empty” space in the sky and recorded the image for ten days. Scientists had hoped to see objects that were out of sight of telescopes on Earth, but the images sent by Hubble surpassed the greatest expectations.

Scientists counted 3,000 galaxies in the combined image of many photos and called it the Hubble Deep Field. These are at different levels of development and are billions of light years from Earth, each with billions of stars and surrounded by other objects in space. The historic image, which captured the furthest and most incomprehensible depths of space ever, has not only changed the attitude of humanity and our understanding of the universe, but has also provided invaluable information to help scientists determine its age, its past and, more importantly, its future.

The Deep Field images of the Hubble Space Telescope inspired composer Eric Whitacre to convey emotions that represented the limitless universe with the help of music. In his “cosmic” composition, written in the cinematic music style, the composer combines the unlimited possibilities of an orchestra, a choir and modern technology. For the first time in choral and classical music history, the audience’s smartphones, with pre-downloaded special mobile app, are used in the work, each becoming a musical instrument. 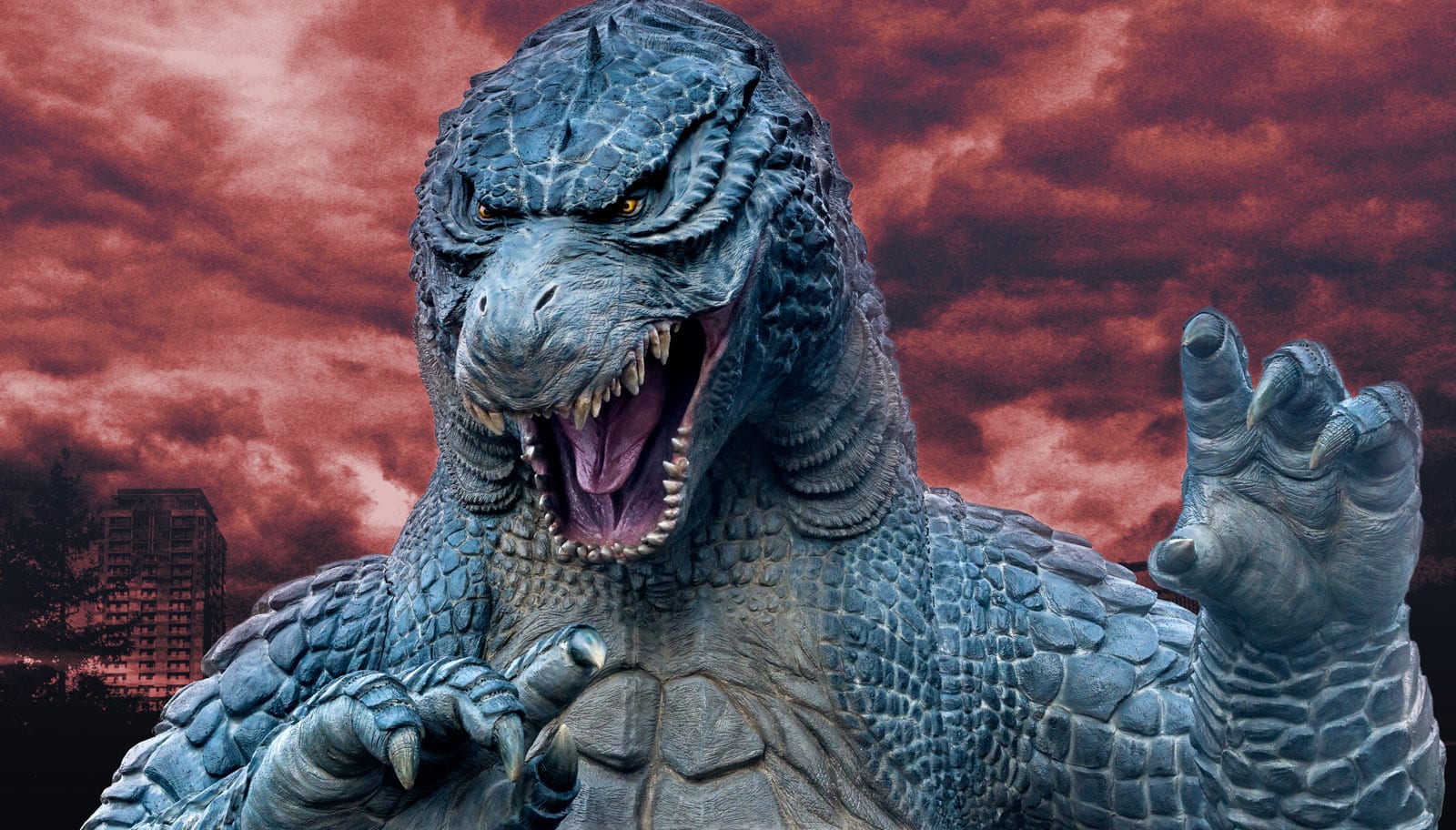 The second premiere in the Christmas concert of Bel Canto Choir Vilnius was yet another unexpected and brave work by Eric Whitacre – Godzilla Eats Las Vegas! The composer calls his composition completely absurd and presents it as a joke. This playful and boisterous piece is like a mosaic of various audio sections, with contrasting and sometimes painfully familiar and characteristic musical details dropped together with seemingly no pattern other than the author’s own invented script.

The audience at the Lithuanian National Philharmonics have heard cries of panic, shouts, mambo and tango rhythms seeming to come from nowhere and small musical quotations from Frank Sinatra, Wayne Newton and even Tchaikovsky. To portray Godzilla’s fantastical story, Eric Whitacre uses about 30 different styles of music, instantly changing between them and thus creating the hectic mood of Godzilla’s visit to the American “Sin City”.

Godzilla Eats Las Vegas! was another special evening premiere by Bel Canto Choir Vilnius, featuring a crazy medley of the Hollywood world that forced listeners to be surprised, look around and, finally, burst out laughing.

The composer created Godzilla Eats Las Vegas! in 1996, but in 2015 he created a new arrangement of the piece with another American composer, Jonathan Newman. The new version of the piece was premiered in May 2015 in Minnesota, USA. The composer gave Bel Canto Choir Vilnius the honor of presenting the work in Lithuania for the first time, thus becoming the first choir in the Baltic region to perform the new version of Godzilla Eats Las Vegas!

Adiemus premiere in Lithuania: for mixed choir, orchestra and soloist!

Another exclusive Christmas concert premiere by Bel Canto Choir Vilnius consisted of works by Sir Karl Jenkins, probably the most famous contemporary British choral and classical music composer, from his famous Adiemus series. Five parts of Adiemus were originally written for a female choir and orchestra, but the composer gave the right to Bel Canto Choir Vilnius to arrange the works for a mixed choir and orchestra. Artūras Dambrauskas, the choir’s artistic director, selected nine of the most beautiful works in Adiemus and arranged them for mixed choir. They were presented for the first time in Lithuania as a single musical program for a mixed voices choir, orchestra and soloist. The choir was assisted by jazz singer Neda Malūnavičiūtė.

Adiemus was the composer’s first project in which ‘classical’ music was combined with ethnic elements such as tribal & ethnic drumming with vocals. It is therefore considered closer to the style of world music rather than Western European classical music.

The Adiemus works have attracted much success around the world and for a long time topped the charts for classical music.

Bel Canto Choir Vilnius presented the latest, most contemporary music for the first time in Lithuania and the Baltic region! Just before Christmas on three successive nights – on December 20, 21 & 22, 2015 – at the Lithuanian National Philharmonic!

Concert Program. The 1st part of the Concert

Concert Program. The 2nd part of the Concert