This is the Only Night. A special Christmas Concert of Bel Canto Choir Vilnius

For two days in a row – November 30 and December 1 – the Vilnius Teachers’ House mixed choir Bel Canto Choir Vilnius invited music lovers to the Lithuanian National Philharmonic Hall, where it performed a special Christmas programme entitled This is the Only Night. The Christmas Concert of Bel Canto Choir Vilnius and Friends. The event also marked the fifth anniversary of the choir. The choir was aided by the Lithuanian Chamber Orchestra (artistic director Sergei Krylov); soloists Joana Gedmintaitė, Ieva Prudnikovaitė, Lina Dambrauskaitė and Milda Baronaitė; as well as jazz pianist Artūras Anusauskas. 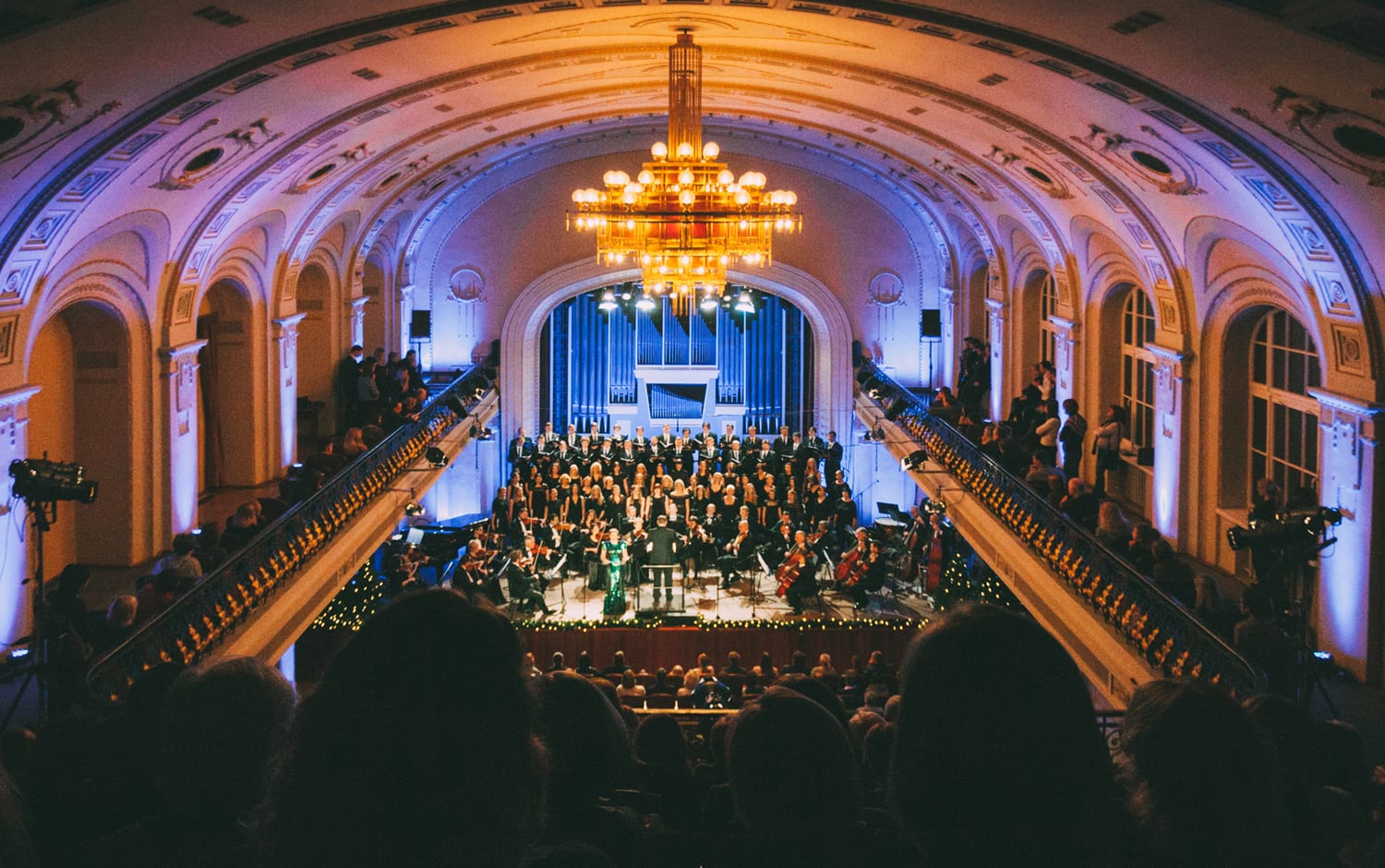 The spirit of Christmas anticipation was revealed through the works of Johann Sebastian Bach, Wolfgang Amadeus Mozart, Giuseppe Verdi and such composers of modern choir music as Morten Lauridsen from the US, Ēriks Ešenvalds from Latvia and Vytautas Miškinis from Lithuania. The piece I Am Here was written by Miškinis exclusively for the Bel Canto Choir Vilnius, which triumphed in Riga this summer by winning a gold medal in the World Choir Games 2014.

The cornerstone of Bel Canto’s Christmas Concert was a special premiere: the special performance of the Sunrise Mass – a four-part piece for choir and strings written by Ola Gjeilo, one of the world’s most popular Norwegian contemporary composers. This exceptionally light, moving and uplifting work is a different, original, and modern take of the young composer – currently residing and working in New York – on the centuries-old genre of Mass in church music.

Gjeilo says he had aimed for a different approach to the traditional Latin text of the Mass. The transparent and spacey music of the work evolves into earthy and grounded sounds, while nebulous and pristine feelings are gradually replaced with more emotional, dramatic ones. Even the traditional parts of the Mass are given new and vivid names, such as The Spheres (Kyrie), Sunrise (Gloria), The City (Credo), Identity & The Ground (Sanctus / Benedictus and Agnus Dei). Gjeilo says that his entire oeuvre, including the Sunrise Mass, has been heavily influenced by film scores, while his favourite authors are American film composers.

Bel Canto has also been influenced by cinematic music. The Christmas and anniversary concert included two pieces from the film Modigliani about the famous Italian painter Amedeo Modigliani. Ave Maria by composer Guy Farley, featured in the film, was first performed by the choir in 2012 and immediately drew the attention of the film’s director, Mick Davis. After watching Bel Canto’s performance of Ave Maria in the choir’s official YouTube channel, he wrote to the choir complimenting its interpretation of the piece. This time, Bel Canto Choir Vilnius performed Ave Maria with the accompaniment of the Lithuanian Chamber Orchestra.

In its Christmas performance, Bel Canto also presented two more pieces from different films – the critically acclaimed song Falling Slowly from the film Once, which received an Academy Award for Best Original Song in 2008; and Once Upon a Time in the West, written by Ennio Morricone for Sergio Leone’s 1968 western of the same name produced by Paramount Pictures.

The concert also featured traditional Christmas songs. One was the Ukrainian national song Shchedrik which was arranged by Mykola Leontovych in 1904 and has been included in the choir’s holiday repertoire each year. It gained worldwide popularity in 1930 when the Ukrainian-born American composed Peter Wilhousky wrote English lyrics for the piece. It is currently known as the Carol of the Bells.

The original version of Shchedrik was first performed by Bel Canto in 2010, but this time the choir offered a different interpretation of the song by transforming the archaic melody into a modern style of Carol of the Bells.

The chief conductor of the Bel Canto Choir is Artūras Dambrauskas, and its choirmasters are Raminta Gocentienė, Milda Zapolskaitė and Alfredas Celiešius. Producer of the concert Audrius Valatkevičius.

This is the Only Night concert in photos

A Patron of the Concert

I am Here
Vytautas Miškinis

Premiere: Once Upon the Time in the West
Ennio Morricone

Sure on this Shining Night
Morten Lauridsen

Have Yourself a Merry Little Christmas
Hugh Martin